Joe Wiki
Register
Don't have an account?
Sign In
Advertisement
in: Characters, Female Characters, Characters from Tokyo,
and 2 more

View source
watch 01:54
Obi-Wan Finale - The Loop
Do you like this video?
Play Sound 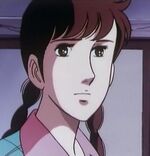 She is the teenage daughter of the owners of the local grocery store. She has a schoolgirl crush on Joe, which develops into romantic feelings as she matures but Joe initially does not notice her feelings and is even at times implied to be ignoring them.

She also disapproves of his boxing career, believing that Joe was on a suicidal path after bring consumed with guilt for inadvertently causing Rikiishi's death, in the end nothing ever happens between them. Instead, she becomes involved with, and eventually marries Nishi shortly before the end of the series, but is not shown to be especially happy with her choice.

Community content is available under CC-BY-SA unless otherwise noted.
Advertisement